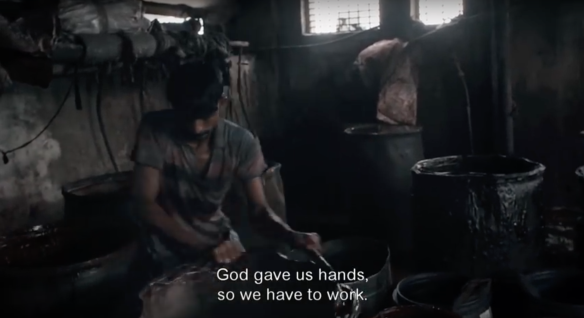 I spent a year editing How It’s Made, exhaustively exploring the rhythm of machinery and human interaction. Working on the program was about as assembly line a job as I ever had too, so my psyche was nicely aligned to the content, until I couldn’t handle watching one more piece of sheet metal get pressed into the form of a sink, or another injection mould endlessly pump out toothbrush stems. I ended up getting my kicks imagining editing an hour long assembly of… something, never revealed except in a series of extreme close ups, made of plastic, wood, stone, every material imaginable.

What the title of Rahul Jain’s Machines, screening at CPH:DOX refers to gets blurry over time. Is it the coal ovens, silk screen printers and rollers that never seem to stop churning out textiles, or the people stoically operating them, working back to back 12 hour shifts to support their families? The distinction is made all the more slippery by the fact that almost nobody speaks in the film. This isn’t manual labor buoyed by friendly chatter, it’s mechanical, silent work done by men who look dead behind the eyes.

I’ve got a soft spot for the quiet, lingering doc that hypnotizes me. Having the time to submerge into simple moments make those moments stay with me longer, play out in my head, get re-evaluated depending on context. The thing I tell creators the most in trailer workshops is to let their scenes breathe more. Give us a chance to be there.

I re-imagined the film as an interactive piece, somehow immersing the viewer in the smell and sights and sounds of that hellish workplace. It wouldn’t require any more talking, just a different frame, with so and so’s name, from such and such a province, however many km away. How many kids they have, how many hours a week they have to work, what their life expectancy is after exposure to chemicals and the relentless wear and tear of heir brutal pace.

Not for the feint of heart, but well worth your time.

Less so the first batch of VR on display at the Charlottenborg Kunsthal. The impact series let me down. I spent most of the time wondering why the pieces were VR. Trevor Snapp’s We Who Remain was apparently about the people of the Nabu mountains in Sudan, but it was edited like a film, one with narration and graphics and multiple characters and no clear storyline. I spent real time trying to figure out what the film was about. Not a promising sign.

Jayisha Patel’s Notes to My Father had more going for it. From the Indian heartland a young woman is trafficked into the sex trade, but most of the film is spent at the family abode. Gorgeous rice fields are seriously heightened in 3d, and there are some genuine moments where time is allowed to pass quietly, slowly, where you can be where you are. But narratively the piece gets muddled, and, like We Who Remain, I struggled to figure out what the piece was really about.

Honestly people, abandon the idea that VR should be like film. Figure out what the language is.

There’s one moment of Inside Auschwitz where I feel the shivers up my spine that I should: when we’re at the ovens, and one can look around, take in the evil, where it’s quiet enough to let the awfulness wash over you. If the piece had been only that it would have been 50 times more powerful.

A conversation about storytelling today was about the unique possibility of doc to let contradictions tell the story, to trigger the audience to feel and think what the subject does, that gives doc the narrative advantage that it has over fiction. VR is well on the way to finding its edge, but that means letting go of cinematic tropes.

VR is just a kid, folks. Let it become the grown up its meant to.