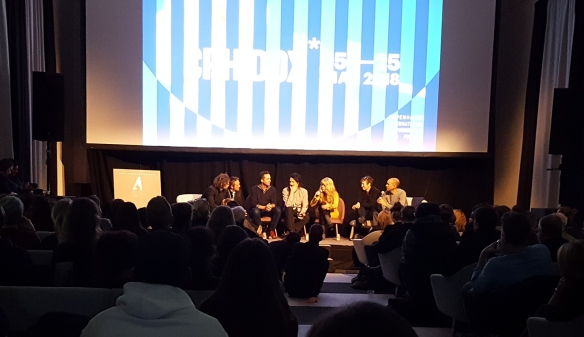 I was what you’d call a late bloomer. I flash back to my formative years a lot these days, with one main question : Was I naturally curious? They say we all were, to begin with. We need to figure out everything from how to stand to how to hold a spoon to how to communicate, and that’s just our bodies and minds. After that there’s a whole world to learn and navigate. And sure, a part of that is biological necessity, but there is another part, more slippery to pin down, that keeps us learning, sometimes in spite of ourselves.

Ian Cheney’s The Most Unknown, the opening film of the Science program of the 2018 session of CPH:DOX, thrives in the space where curiosity borders on obsession. 9 scientists from different disciplines, in 9 places around the world (mostly the US), sleep badly, wax philosophic about the weird corners of nature that we haven’t even begun to explore, and challenge each other to explain to them the particularities of their disciplines which they (and by extension we) don’t yet understand. We meet an American microbiologist, cave diving in Italy, looking for rare blooms from rare bacteria and marveling over the slime trails on the cave ceiling left behind by… who knows what. As she says, there are something on the order of 30 trillion species on the planet. We know about 1 million of them. We don’t even know how to look for the rest, because we don’t know what we’re looking for.

We follow her to Italy, where we meet a physicist and his quest for dark matter (it’s everywhere but we don’t absolutely know it’s everywhere). He takes us to Belgium where we meet a psychologist trying to understand how consciousness works, who later takes us to the hot springs of Utah under the stewardship of a wonderfully geeky astrophysicist, who takes us to a cosmic telescope in the peaks of Hawaii, wide eyed to the biggest toy ever. Interdisciplinary encounters, they’d call it, turning the film into a micro-petri dish to see what an one can inspire in the other, and what that does to their practice.

The curiosity of each scientist is infectious, and emphasized by how much they all admit that they don’t know (which is most things). What drives them in fact is the blank spots in our knowledge, the need to answer all the questions the rest of us in our day to day never think to ask. What are we made of? What does it mean to be conscious? Every question we can answer raises a multitude more, and these engaging science nerds (gold star word) are basically grown up kids, full of wonder, searching for answers, and almost hoping they don’t find them.

One of the things I’ve come to love about science is the multiplicity of patterns. A network of rivers, viewed from way above, resembles a branch of veins inside our bodies. A genus tree of how species and life forms are organized drawn on a white board, viewed from a step back, looks like a brain, stem and all. And if you’ve ever seen Charles and Ray Eames’ Power of Ten, you’ve witnessed the patterns that repeat from the widest view of our galaxy, to the most microscopic study of our cells. We’re treated to some of that in the Most Unknown, and it’s the first time in a while I felt that drone shots are a serious addition to a film. From that vantage point, whether it’s true or not, it’s easy to believe that the building blocks of reality resemble each other because they’re perfect in their own way.

When I edit a film, I irritate the filmmaker with a million questions, trying to get to the heart of what their film is really about. Sometimes I wake up at night with fresh ideas, and sometimes there’s a moment (my favorite!) when we both realize that it’s not about what we thought it was about. It’s got the same character and we’re using the same footage, but with a fresh context it all means something totally new. I got a feeling like that watching this unlikely dream team for a couple of hours. If only I’d seen this film in high school…

Egyptian filmmaker Mohamed Siam’s portrait of a bad ass young girl named Amal, who stood with all the guys at Taher square during the Egyptian revolution. The film was shot over a period of years, following Amal from the age of 14 to 20, and through some amazing home movies from her youth, all the way down to infancy. A refreshing film that naturally affords respect to its character, instead of taking the easy route and painting her as the victim of a patriarchal society. Sure she is, but that’s not the sum of her anymore than it’s the sum of anyone living under oppression. Her dreams are no different than anyone else’s. The Egyptian revolution was full of promise, and she’s not immune to the disillusionment that followed. As one of those micro/macro films I like, it’s as much a portrait of Egypt today as it is of one young girl becoming a woman.

Screening again March 20 and 25 at CPH:DOX

The Ed Wood of Afghanistan.

Kind of rolls off the tongue doesn’t it.

Sonia Kronlund’s made a film about Salim Shaheen as he produces his 111th (?!) film, which is about as far from a picture of Afghanistan as I ever expected to have. I’m waiting to go in to the cinema now, so I’ll share my feelings later. But already, if this guy can produce 110 films (and presumably 111 works out ?) in a country where they would have us believe nothing is possible, then my tolerance for filmmaker complaints about how hard it is to make movies just nose dived.

A Science fiction documentary. That’s what they’re calling it anyway. An experimental hybrid that focuses hard on sound design. Filmmakers Giorgio Ferreroand & Federico Biasin promise us a “film that locates the future in the midst of our present age.”