After a year of almost unbearable loss, I made the bright move of watching 3 nakedly painful docs, in ascending order of pain. I should learn to read those synopses more closely.

12 Days, by Magnum photographer Raymond Depardon, is the most clinically cool of today’s batch. The title refers to the period of time that someone can be held involuntarily in a psychiatric institution in France, before a judge rules whether or not to prolong that stay. The film is a day in the life of those judges, as they meet patient after patient, each more heartbreaking than the last, and tells them if they’re free, or if they’re not.

I watched the film kind of amazed by the formal rigour of the thing, as Depardon frames the patients in Medium shots, and the judges in tight close up. When the patients’ attorneys appear, they’re always framed beside their clients, detached and practically anonymous. The pattern is only broken in short montages of the hospital, foggy, indistinct, and clinical.

I’m pretty consistent. If there’s an underdog chances are I’ll root for them. In 12 Days I can’t say I identify with the particularities of the characters’ issues, but their pain is obvious, and while I can understand that in an overloaded system these judges simply do their jobs, I couldn’t bring myself to justify a system that places the most vulnerable of us in such a vulnerable position. Is it better to keep unwell people locked up for their sake and ours? Whose benefit is it for really? I couldn’t help flashing to Grey Violet, a film I consulted on a couple of years back, whose ultimate message was that protecting the weakest of us is humanity’s acid test. My dad’s family in Syria, prior to our generation, would inherit the responsibility and honour of caring for the elders and the troubled. I can’t imagine what we’ve lost by not keeping that up.

Last chance to catch it is March 22 at CPH:DOX

The Work is sort of the flipside of that, and sort of not. Filmmakers Jairus McLeary and Gethin Aldous take us into the belly of Folsom prison (yes the Johnny Cash one), along with three civilians, for a firsthand look at a seriously unlikely program. For the last 16 years, ex gang members, reformed criminals and murderers, and violent offenders, have brought civilians into those walls to do the work: an Iron John type 4 day workshop whose sole mission is to exorcise the demons from these men. The civilians are a kind of bridge, or maybe a kind of group father confessor for the cons, all of whom have become and stayed “hard” for as long as they can remember; for status, for survival, for power. The x-cons leading the workshop are tough, but the secret to their strength is that they’ve learned to embrace their vulnerabilities. Hard as the cons are, they’re scared shitless of their own humanity.

It’s a hard thing, watching tattooed warrior after tattooed warrior break down into a searing hysteria, held down by the rest of the guys, while the wail of other men in other groups echo in the background. Maybe it’s not even a desirable thing, to find a soft spot for men who’ve done unspeakable things, hurt the ones they love, and fathered children they’ve never met. But just as the pattern risks getting monotone, the one unshakable truth to the whole thing crystalizes; that none of these guys, cons or civilians or ex-cons, had a father figure. And if they actually did know their fathers, those men were givers of pain and humiliation, withholders of love, shadows of what a father could have been. The guys in this doc grew up violent. They are violent, and so is their catharsis. Brian, one of the civilians, has one of the most visceral explosions when he finally lets go, and gets a bloody gash on his forehead for his troubles. The hilarious line that follows prompts one of the truly funny moments in the film. 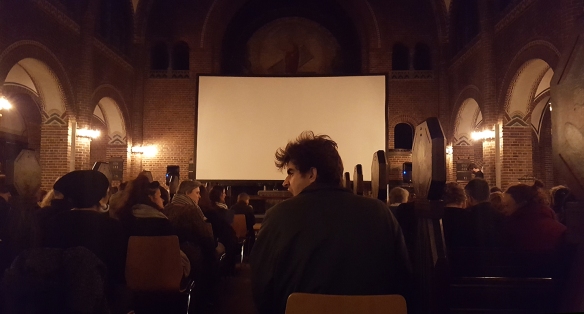 The screening I attended was in a church, and it was awesome. Watching from a pew, with that musty church smell, and feeling too close to my neighbor, it was a far cry from being behind bars, but the community was amazing. I couldn’t help but try and imagine what those rooms at the prison smell like, what the echo is like. Not exactly VR, but as immersive as a screening can get.

Watching The Work these guys were doing, and living deep inside my own crises, I couldn’t help but reflect back on how I got where I am, what made me who I am, what, as a guy, I’m capable of communicating, and what I’m not. I mean there’s a reason why some of the guys in the sessions are civilians and not all cons. There are generations of men brought up to keep all their shit inside. In my case, all the years of trying to undo that programming has been, if not a failure, then at least a letdown. The men in The Work talk about the respect they hold for their mothers, but the disrespect with which they’ve treated the other women in their lives. Metoo is partly an emancipation cry for women, but I think it’s also an opportunity for men to step up and participate in the conversation. Call me naïve but I see that as a win-win for everyone.

And then there’s Of Fathers and Sons, Talal Derki’s latest in his planned trilogy. If Return to Homs was a treatise on violence and how it begets violence, Of Fathers and Sons starts to peel back the layers of devastating cost of protracted, institutionalized violence.

It’s a hard film to talk about, an that’s the point. Does anyone really want to identify with a sniper? Someone who names his sons after martyrs and promises to send them to battle if the local recruiters don’t do it first? Isn’t it easier to think of these men as maniacs and radicals, hell bent on destruction and mayhem?

It is. It’s way easier, and that’s part of what makes Derki’s film hard to digest. The titular father in the film loves his flesh and blood no less than any other father, maybe more, and his sons could be anyone’s sons, looking to their dad as a role model, and learning daily through play. It just so happens that the toys they play with are homemade explosive.

I tried to put myself in the shoes of a father living in a country torn to shreds by war, where conclusive answers are in short supply, so the only story I can connect with is the one that makes sense to me; that the enemy is so and so, that our purpose from now on is war, that the only acceptable outcome is victory, or else more war. If that’s my normal, why wouldn’t I teach that to my kid? Isn’t that we ultimately do; pass on our values to our children because we believe that we’re right? If I strip away the politics and the violence and the dogma of war, then what’s left is our relationships, like between a father and son. Osama, the eldest, is practically bred for combat, named after you know who, and surrounded by people who deify him. Why wouldn’t he follow in his dad’s jihadist footsteps. The right of passage isn’t just a simplistic “violence is passed on”, it’s a father giving his son something to believe in, and a son who wants to make his father proud.

One question mark I took away: Derki talked in the Q & A after the screening about how he shot the film. His access depended on him telling his subjects that he shared their beliefs and how he wanted to carry that message to the world. The beauty of the film though had me sympathizing with this family. I didn’t want them to get hurt, of to end up fatherless, and I felt a bit offended for them that Derki had had to deceive them. Testament I guess to his talents as a filmmaker, but it does give me pause.

But I guess that’s the theme I’m taking away this year: that the richness and complexity of all these stories make simple conclusions at the end of a review meaningless.

Of Fathers and Sons screening at CPH:DOX March 23